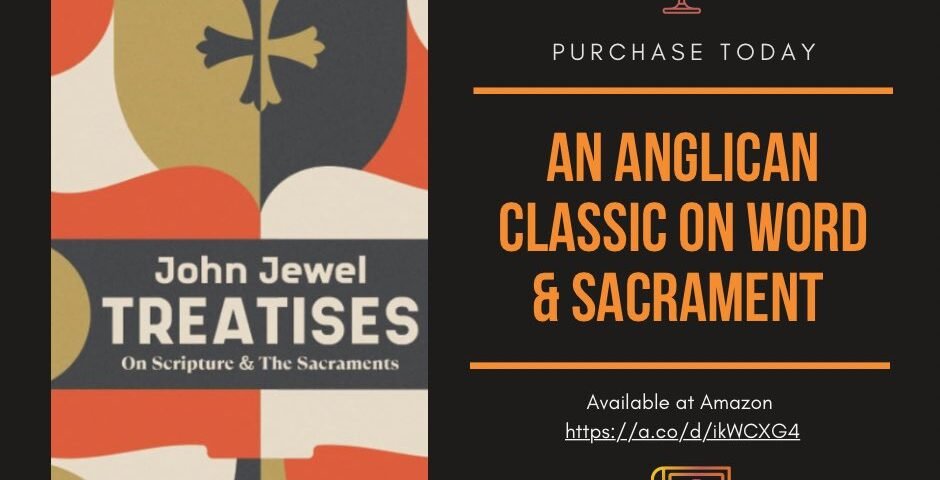 Let us now praise famous men, and our fathers that begot us. The Lord hath wrought great glory by them through his great power from the beginning.

As I write during this octave of All Saints I smirk thinking about Bishop John Jewel. He is an English saint worth remembering during this festive season because of his prolific sermons and works defending the English Reformation. While some emphasize October 31 as “Reformation Day,” perhaps the best manner to celebrate the English Reformation is by celebrating Holy Communion as reformed by Archbishop Cranmer, in our own native tongue, and reading the Scriptures in the King’s English. Jewel’s defense of Cranmer’s reforms, reestablished by Queen Elizabeth I, is a helpful reminder not only why Anglicanism exists, but also what makes us uniquely reformed compared to the Continental Reformation and distinctly catholic but not Roman. Bishop Jewel was no stranger to the Continental Reformation and sought exile on the continent during Queen “Bloody” Mary’s reign. However, instead of coming home to England as a Puritan after Queen Elizabeth’s ascension, he vigorously wrote and preached in defense of the prayer book and English Catholicity against Roman claims to the contrary and Puritan allegations that the Church of England needed to be “purged” of “lingering popery.”

The word of God is that unto our souls which our soul is unto our body. As the body dieth when the soul departeth, so the soul of man dieth when it hath not the knowledge of God.

– John Jewel, Treatises on the Scriptures and on the Sacraments, The Necessity of Scriptures, p. 35.

Jewel’s two-front war of words against Romans and Puritans alike merited the illustrious Richard Hooker referring to his teacher as the “worthiest divine that Christendom hath bred for some hundreds of years.” Although Anglicans typically recall the great Richard Hooker and his tome, Of the Laws of Ecclesiastical Polity, they sadly have forgotten the “worthiest divine” for hundreds of years, Hooker’s mentor: Bishop John Jewel.

Perhaps because Bishop Jewel was called home by our Lord at the young age of 49 is why we have forgotten his hand at defending the Elizabethan Settlement. Or if we remember him at all, it is through the influence of his Apology of the Church of England. The Apology was so revered by Archbishop Richard Bancroft he ordered a copy placed in every parish. This occurred forty years after Jewel’s death! The influence of the Apology continued even after the Puritans briefly overturned the Elizabethan Settlement during the English Civil War. Once the monarchy (and episcopally-governed Church of England) returned to power during the Restoration, Bishop John Cosin of Durham required in his 1662 Visitation Articles that every parish in his diocese have a copy of the Books of Homilies “together with the works of Bishop Jewell in defence of the Church of England.”

Bishop Jewel’s Apology was a huge influence on my journey into Anglicanism, along with his student, Richard Hooker’s Of the Law of Ecclesiastical Polity. However, after over a decade as an Anglican, I continually see new parishioners and inquirers puzzled as to what Anglicans actually believe. Lifelong Episcopalians-turned-Anglicans, evangelicals fleeing fundamentalism, seminarians, and even postulants for holy orders share the same common question – what is an Anglican?

Unfortunately, abandoning the formularies of our tradition, the 1662 Book of Common Prayer, Articles of Religion, and Ordinal leads to ignorant Anglicans. Worse, we see undiscipled Christians who forget or never knew that we Anglicans are a tribe based upon the firm foundation of Word and Sacrament. Our roots are as ancient as Rome or Constantinople because our Reformation was necessary to preserve, reclaim, and maintain our catholicity. Regrettably, many contemporary works on “what is Anglicanism?” lean heavily on an ambiguous “via media” without so much as mentioning the formularies, much less Word and Sacrament ministry. The only “via media” stressed is between Roman Catholicism and the every-broad Protestantism that finds its roots in 19th and 20th Century revivalism. When Anglicanism tries to redefine itself as between modern Roman Catholicism and Radical Protestantism, it will soon find itself in a weak center with little holding it up and ready to give way to the depths below.

Enter into the picture Bishop John Jewel’s Treatise of the Holy Scriptures and Treatise of the Sacraments. These two works were republished as one volume by The North American Anglican Press with yours truly as editor, under the title: John Jewel Treatises on Scripture and the Sacraments. My aim in republishing an affordable copy of these two Treatises is a push towards Anglicans lay and clergy alike ad fontes – return to the source of our great Apologist, Bishop Jewel. My prayer is Anglican seminaries and Anglican-track programs form future ministers upon the very words of the Oxford martyrs, English saints, and their students of the 1600s to orient faithful, orthodox Anglicanism towards the faith once delivered. What better way can we celebrate our English Reformation than through the words of men like Bishop Jewel, who defended our faith by going to the church fathers? Further, my hope and desire for my fellow ministers are that we form our laity better by directing them to godly bishops like Jewel, whose tireless efforts were enshrined by Archbishop Bancroft and a hundred years after Jewel’s death by Bishop Cosin.

We say, and believe, that we receive the body and blood of Christ truly, and not a figure or sign; but even that body which suffered death on the Cross, and that blood which was shed for the forgiveness of sins.

– John Jewel, Treatises on the Scriptures and on the Sacraments, Of the Body and Blood of Christ, p. 80‒81.

My first work was a partial modernization of Bishop Edmund Grindal’s Family Prayers, occasional prayers found attached to the Elizabethan prayer book, and my essays encouraging families struggling to start regular prayer and catechesis with their children. This second work was born out of a realization that far too many Anglicans do not know their own faith and need to be catechized first before they can effectively catechize their own cell of the church body, i.e. their family.

Anglicanism is not a wax nose molded to please the parishioner, fit the theologian’s fancies, or pacify the priest’s preferences; nor is it an aimless ship lost at sea. It is anchored upon the rock of Christ Jesus and finds her catholicity through her faithful witness to the Holy Scriptures and reception of our Lord’s sacraments. Let us come home to the safe harbor of the ancient faith and heed Bishop Jewel’s anchoring our faith upon the Scriptures and the Sacraments. In other words, let us take up and learn our faith through Jewel’s Treatises and learn the faith of our fathers.

Therefore, a father must teach his child, what God is: That he is our Father, that he hath made us, and doth feed us, and giveth us all things needful, both for body and soul; that he is our Lord, and therefore we must serve him, and obey him, and do nothing whereby he may be displeased; that he is our Judge, and shall come to judge the quick and the dead, and that all men shall come before him, to receive according as they have done in the flesh.

– John Jewel, Treatises on the Scriptures and on the Sacraments, Other Sacred Rites in the Church, p. 113.

About The Venerable Andrew Brashier

The Venerable Andrew Brashier serves as Chancellor for the Jurisdiction of Armed Forces and Chaplaincy (ACNA) and is the rector of Anglican Church of the Good Shepherd in Pelham, Alabama. He works full-time for the nation's largest Christian prison ministry in governmental affairs and faith-based outreach to local churches nationwide. He blogs about family oratories and the impact they can have in reigniting Anglicanism at www.thruamirrordarkly.wordpress.com. He recently republished Bishop John Jewel's Treatises on the Holy Scriptures and Sacraments (https://a.co/d/ikWCXG4). His first book is available at Amazon (https://tinyurl.com/yhsx638n) and focuses on family devotions and private prayer in the Anglican tradition.

'A Forgotten Jewel Glimmers Again' has no comments