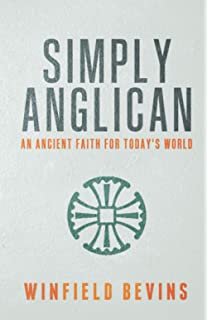 When I was returning to my Anglican/Episcopal roots as an adult, rediscovering the Book of Common Prayer was the most important contributing factor. Two other books, however, were almost as influential as the BCP: Robert Webber’s Worship is a Verb, and John Westerhoff’s A People Called Episcopalians. The former was assigned reading in my graduate studies at a Wayland Baptist University, and the latter (in its 1996 edition) was a gift from my grandmother who is a retired Episcopal deacon. Both works are essentially introductory in content. Both works are aimed toward either a seeker or a novice to liturgical Christianity. Both works were exactly what I needed as a young man who had become dissatisfied with a more general American Evangelicalism.

I often found myself thinking of those books as I was reading Simply Anglican, the latest book by Winfield Bevins. A priest in the Anglican Church of North America (ACNA), Bevins’ website describes him as “a liturgical missiologist” and notes that he is the Director of Church Planting at Asbury Theological Seminary, a Methodist institution. The site also describes his background in the free church tradition and his passion for learning about and incorporating a variety of Christian traditions into his writings.[1] Simply Anglican is the work of an Anglican convert writing to other potential converts. Had this work been available twenty years ago, it would have likely ranked up there with Webber’s and Westerhoff’s books in my own reversion story. Indeed, it might have surpassed them in utility as it is designed with the reflective seeker in mind.

I use the word “designed” very deliberately, as the specific content is aided by important design choices. For example, each chapter includes single-paragraph sidebar testimonials from other modern Anglican figures who have similarly converted from other traditions. Additionally, each chapter concludes with a series of discussion questions. These range from simple recall of facts from the chapter to deeper questions of analysis and reflection. Finally, Bevins includes significant recommended reading lists with each chapter for those who want to go deeper than the scope of Simply Anglican, including consistent references to relevant sections of the ACNA Catechism. These design features make Simply Anglican an ideal first step for new Anglicans.

As to the content itself, chapters include topics of Anglican history, belief, liturgy and worship, sacramental theology, an approach to Scripture, polity, missiology, and a call to a charitable approach to the Anglican via media. Again, the content is necessarily introductory and thus avoids significant nuance or depth. After all, Bevins’ audience is not cradle Anglicans/Episcopalians, nor is it the curmudgeonly veteran of in-house Anglican controversies. In that vein, Bevins’ represents a wide, basic Anglicanism; churchmanship polemics are refreshingly absent from the book.

While this emphasis on wide, introductory topics is the main strength of the book, it also leads to its greatest weaknesses. Some of Bevins’ presentation of Anglican history is shallow to the point of bordering on propagating mythology. For example, the relatively modern and historically inaccurate concept of Anglicanism as the middle way between Roman Catholicism and Protestantism is floated frequently, including the astonishing claim that Richard Hooker’s Laws of Ecclesiastical Polity argued that Anglicanism retains the best of Roman Catholicism and Protestantism.[2] It would be an understatement to point out that Hooker, like the rest of the Elizabethan church, was far from friendly toward Rome![3]

Similarly, there is a tendency to see all of Anglicanism through late-20th and 21st century lenses. While the classical Formularies are laudably held in esteem[4], there seems to be an assumption that the post-Vatican-2 way of worshiping has always been the norm. As my main ecclesiastical and academic interest is in Anglican liturgy and history, this tendency is something of a personal pet peeve. That said, this is a common tendency in Anglican writings throughout the last couple of centuries. It is almost normative for Anglican writers to see prior Anglican eras only through their own lenses. Witness, for example, how common among early Anglo-Catholics was the tendency to see the Caroline Divines as proto-Tractarians rather than a distinct development of their own.

Finally, there is one aspect of Simply Anglican for which I would love to see some follow-up. It has been common in the last decade or so to talk of the “three streams” of Anglicanism as Catholic, Evangelical, and Charismatic. While the specific language of “three streams” is relatively new, a threefold understanding of the tradition is less so. However, rather than a Charismatic “stream,” older versions usually had “broad,” “liberal,” or “latitudinarian” instead. In his penultimate chapter, Bevins adds all four of these “streams” together. He writes: “The various streams are especially relevant today because the Catholic, Evangelical, Broad, and Charismatic dimensions of the faith belong together and and are a gift to the body of Christ.”[5] I would be interested in how Bevins might deal with some of the potentially contradictory values or positions upheld by each of the (now) “four streams” within Anglicanism. Particularly, I would be interested in a further development of how the “broad” stream fits into modern orthodox Anglicanism. He notes that the “broad” stream has its roots in a desire to fit German higher criticism and Darwin’s theory of evolution into the tradition.[6] While I would certainly not consider myself a Fundamentalist, I hardly see either of these theories as beneficial to the Church and its history! So what does the “broad” stream positively contribute to Anglican orthodoxy?

In the end, I find myself a bit ambivalent toward Simply Anglican. While the strengths of the book outweigh its weaknesses, the weaknesses are such that I would personally hesitate to revisit the book. Perhaps I have simply become too old and curmudgeonly to appreciate it! Indeed, I have found the same to be true of revisits of both Worship is a Verb and A People Called Episcopalians. This puts Bevins is good company, despite my criticisms. Nevertheless, I would not object to its inclusion in discipleship classes or even its use as the foundation for an inquirers’ class at an Anglican parish. Indeed, within the genre of introductions to Anglicanism, Simply Anglican is probably one of the better books available.

[3] For a more detailed discussion of the tendency among modern Anglicans toward mythological assumptions about the tradition’s history, see  “A Historically Grounded Anglican History” by Gillis Harp, which was published by TNAA after I had originally written this review.

'Book Review: “Simply Anglican: An Ancient Faith for Today’s World”' has no comments